In the words of our current host, Henry, ‘BOOM!’ What was meant to be a 2 week stint at Camping St.Hilaire turned into us staying for the duration of the summer and it is with great regret that we had to pack up and head off early on Friday morning. We first came across this lovable family when we were at a loss in Spain. Things hadn’t gone according to plan and no matter how hard we tried we couldn’t find any volunteer projects. So, after hours and hours of applying for projects and after numerous negative responses, Warren and I decided Spain was trying to tell us something and the message was coming through loud and clear…Vamos! So, with that in mind we set our sights further afield and happened upon a campsite in France that sounded like it would fit us to a T.

Large pitches, electricity, water, waste disposal and a weekly allowance for food. The only trouble was it was 19hrs away from our location in Oria, Spain. By now you should know us rather well and there was absolutely no way we would allow a small thing like 1384km to get in the way of our adventure. So with that, we hitched up once again, bid farewell to Joel, Cori, Lyndon, Holby, Taliah and Maggie and set off- destination Chalandray, France. After travelling for two days, a stopover in Zaragoza and a challenging route which saw us tow our caravan up and over the Pyrenees mountain range, we arrived at around 11:30pm. 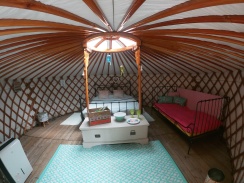 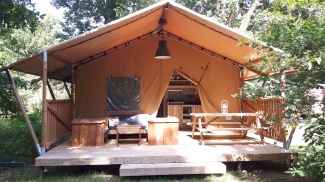 On arrival we were greeted by Henry and offered a pint of his finest Belgian beer as well as a huge dish of barbecued chicken, sausages and ribs (something that made him an immediate hit with our hungry kids).

The following morning we were introduced to the rest of the family- Kat, Daisy and Polly and we sat down to the first of many ‘team talks’.
The first two weeks of our stay saw us complete projects like repairing and refurbishing the mini golf course, building a fire pit and little bits of general maintenance.
But two weeks was too short and by the end of it we agreed that we would move on to our next project in Limousin and then, for the first time since leaving the UK, backtrack and return to Camping St.Hilaire for what promised to be a busy summer. 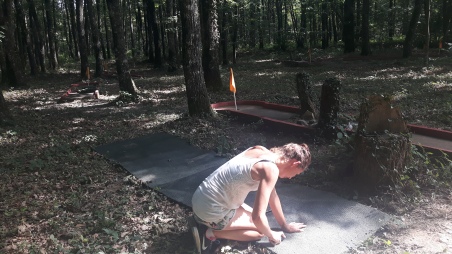 The remainder of our summer was spent working behind the bar, helping Henry with the wood fired pizzas (whilst Warren and I had a domestic over pizza boxes), cleaning the glamping accommodation and doing our best to avoid checking in French customers…’Je suis désolé , je ne parle pas Français. Parlez vous Anglais?’ The answer was almost always, ‘NO!’ 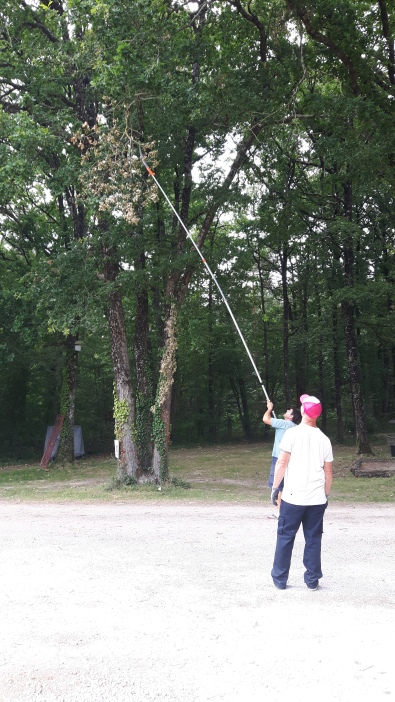 There was also plenty of swimming, sightseeing, sunshine and a visit from some friends from back home.

During our time with the Walkers there was no shortage of banter or beer and the weeks flew by in a blur. We met people from all over Europe, as well as, almost all of Henry and Kat’s extended family and closest friends. There were so many experiences and there are so many stories to share but I think I’ll end this piece with a shoutout to all those who made our time at St.Hilaire absolutely unforgettable….especially Henry, Kat, Daisy and Polly, we LOVE you guys and we will see you again next year ❤️

Video Of Our Time At Camping St. Hilaire Here

7 thoughts on “Stop 8- Camping in Chalandray”